Circe’s first day in the ring. I was nervous of course i was. Its a big day. Circe would have to cross a big street, a ditch, a stream and be in a ring that is huge much bigger then anything shes experienced at least with me before. Plus available for general use in a public park. So theres a whole lot going on. Thats a lot for one day. I also had to separate her and Jezebel to get it done. Which was making me fret because last time Jezebel lots her horsey mind in the process.  This kind of thing just crystallizes why I have Michelle on my team. Its not something i wanted to attempt to do alone. I’m lucky to have her help with all things ponies.

I pulled Circe from the field and though Jez stuck close to the barn she didn’t freak out or call out or anything while i got the red-head ready. The other two horses were still in their stalls when it came time to leave, i brought Jez in and texted my barn mate to ask her to put Jez out with her babies if i wasn’t back before she got there. Step one done, off to cross the street. Big street, double yellow line and sometimes they don’t slow down. It was empty on the way there and leading Circe and not riding her was the right decision. She wasn’t sure about cross the yellow line (i wonder how they view that) but she did cross it and viola, street crossing done with no incident and rather well.  Next up a small patch of woods and a ditch with a creek. I went ahead so Circe could see me on the other side. She was hesitant at first but Michelle was patient she let her stand still but if she tried to walk backwards she would get a small tap of the dressage whip, it didn’t take long before she was down the ditch at the waters edge. She put her nose to the water and decided it was fine and walked across. Yay Circe! Much easier then i had expected and she just walked and didn’t jump it like i feared. 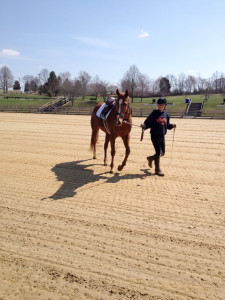 Though the parking lot and over to the ring. She was very up and excited, lots of new things to see and she looked at them all.  Michelle took her into the ring which is huge and very well maintained and decided lunging her was probably best. We had a few watchers from their cars but over all it was calm and empty out. Circe decide she wanted to run on the lunge  so Michelle let her get a little energy out before asking her to listen to much. When she calmed some she was asked to listen and she complied and then it was time to mount. The mounting blocks are outside the ring so Michelle got on from the ground. The first time for Circe and low and behold she stood for it! What a good pony! She was put though her paces as the walk and the trot and eventually she was okay with being in the new place and the huge ring. She never spooked at anything, but she was very up the whole time. I was planning on walking her around after Michelle but we thought better of it as it was a lot for her to take in and once Michelle dismounted Circe was cooked and ready to go home. Baby steps.

The walk back to the barn was easy, the water was easier the second time, she even stood in it for a bit. A big truck driving fast at the street crossing freaked her out a little and she did a little ” the truck is going to eat me” dance but as soon as it was out of sight she was fine and then back across the street and to the barn. She was eager to get out with the herd. She had reached her limit. We had asked a lot of her and she did better then expected. It really couldn’t have been any better. So i un-tacked her and put her out in the field and watched her disappear at a full on run up the hill to be with her buddies.

As to Jez she never called out for her and according to my barn mate who turned her out she was a doll and happy. So i guess that screaming her head off thing for Circe was because they were in heat and still in a new place. I’m still going to keep working on them being separated as being herd bound is a nasty habit and i want to keep it to a minimum if i can. I then hung out, did my chores, chatted with my barn-mate and then went to visit M and Peanut who were waiting for the vet. I left the girls out side and went back after dinner just at dark to bring them in for the evening. Its getting warmer at night and im going to start keeping them outside on warm nights, like tonight! They really didnt want to come inside anyways so they can just stay out and be horses.

6 thoughts on “The big ring”