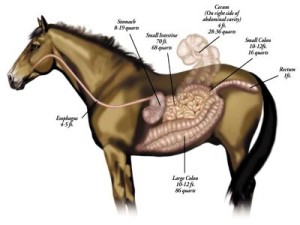 Its been a rough week. Weather, sucks, blah blah blah. Its not just the weather though. I’ve been stressing out about the baby Bo and all things horse. Waking up at 4am fretting and worrying. Yeah, thats going over well in my house </sarcasm.  In an attempt to try to get all my horsey ducks in a row. My trainer gave me the name of the chiropractor (actually a vet, chiropractor, acupuncturist, horse bio-mechanic guy) she uses, he sounded pretty good. When I researched him up I saw he has a lot good feedback from people I respect. I watched a video of him working on a horse and I thought he might be a good fit for us. I called expecting to get his service and leave a message, he answers his own phone. I was lucky enough to get to speak with him and tell him about Jez and whats been going on. He asked me questions. How long have I had her, how long did she race, what kind of work was she in. He listened to my sad tale of Jezebel rearing woe. Then he said that he had a pretty good idea what was going on with her and that he gets a phone call like mine 4 times a week. He then said he only comes to MD once a week and that he would try to fit me in the following week. Which he did, I saw him yesterday. He saw both Jez and Circe and it was worth every single bright shinny penny I spent on it (thats a lot of pennies let me tell you)

Jez: Had  a lot of pain from the TMJ to the C7, again in the T14 and 15 and a couple of ribs were out. L2 to L6 were painful as well as the base of the SI (a few other places to) in some places she was a 4+ on a 0-5 scale. Poor baby was just intensely reactive all over but the worst of it was he was sure by her reactions. Hind… Gut… Ulcers.  Hind gut ulcers are very different from gastric ulcers and are treated differently. I watched as he did some work on her and i could see the change happen before my eyes. Points that were a 4 after he did his magic were down to a 1 or a 0. It was jaw dropping amazing. He said Jez is just at her tipping point and that this is really common for horses her age, who have been off track and in training the amount of time she has been. He also reassured me that I didn’t do this to her. It was nice to hear but i cant help but blame myself.

He told me it was time for a paradigm shift in how I approach working with my horses and asked me if i was ready to do that. I am. I have worked with non western medical professionals in my own life because i have epilepsy (surprise!) and a very low tolerance for the brain altering drugs doctors dole out to treat it (I’m no longer on any medication and haven’t been in years ) So I’m already sold on what alternative therapies can do and did do for me, so of course i believe its possible they will work for my horses. Bring on the paradigm shift…

1.  get her hind gut in order and rebalanced.

2. light (laser) therapy to try to bring some healing circulation to points on her body.

Those are all the things i can do myself with guidance from the new doctor and as we move forward he will give me more things i can do to keep her happy and pain free. He wants to see her again in a couple weeks to make sure were on the right track see how shes progressing with me doing work on her. He told me that Jezebel was likely being misunderstood for a long time and I had to choke back the tears as to not look like a fool in front of the new doctor.

Circe: TMJ though C7 much more on the left then the right and lots of reaction and pain in the right hind at L2 and L5. Which of course would correlate with her being over on the right hoof and would explain that mystery right shoulder weirdness (technical term!) i always thought was there. As well as some other random spots. Circe it seems is more all over pain not as localized and intense as Bo. He also noted that Circe is much more stoic then Jez and that her cribbing likely started as a way to self medicate. Now of course its just horse crack and shes a addict.

1. myofascial releases and stretching (in different places and different techniques)

2. light (laser) therapy to try to bring some healing circulation to points on her body. (only a couple of spots)

He he doesn’t need to see her again for 4-6 weeks and said of i stay on track with her, he should have to do very little with her when he returns to see her.

It was a very enlightening experience. My jaw literately dropped at times because i could see actual results right in front of me. No wonder its so hard to get an appointment and why so many people are clamoring to get this guy into their barn. I spent some time last night ordering all the things i need for Jez and im ready to go. Jez is still on a break and wont be under saddle until the new doctor clears her. Which would be a lot harder if the the weather was nice, which its not. Its frozen and gross and cold. I felt a little relief as i always do when i have a plan to execute. I’m not good as the whole wait and see thing. I also have someone to commiserate with as M’s horse is still dealing with a laminitis flare up and we can support each other with our horses medical issues. I think her horse is on the right track and I’ve become an expert at finding pulses in an effort to help M out and take a little pressure off her. Yesterday i took the morning shift checking Willa for pulses and making sure she had her food at the right time soaked and in the right amount. M’s issues are a lot more serious then mine and i know its really upsetting her. Kinda puts mine in perspective and aids in not letting me get all self absorbed.

I’m ready for the paradigm shit.. bring it on.