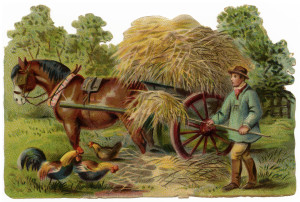 My horses don’t move until April 1st, up until then get to do all kinds of things to prepare for the move, yanno besides stress out about it. The barn manager and by that shes the liaison to the non-profit who owns the place, kindly agreed to let me move stuff in early and get my space ready before my actual move in date. Which is pretty cool of her. First up buying hay!

There is a giant hay loft above my barn and half of it is mine, there’s a lot of space for me to store my hay. Since i don’t own a truck i need my hay delivered and they need a hay elevator as i’m not about to truck up heavy hay bales via the inside stairs  by hand. Since i’m getting all that, i might as well get it stacked for me too. A women in the barn next door was making an order with a well known farm in my area that I could get in on. Great! I got a text with some prices and cuttings and kinds of hay. 1st cutting of timothy or orchard or a mix, 2nd cutting of orchard or timothy, 2nd cutting of alfalfa or alfalfa/orchard. After researching (thanks Google!) I finally settled on the 2nd cutting of orchard. Next I needed an amount. I almost went with buying enough to last me 6 months just to not have to worry about it for a while  but had to consider some things…

A. I don’t know the quality of the hay from this farm first hand

B. its winter and hay prices are more expensive in the winter.

After doing the math and adding in that for a month or so id be responsible for haying the field half the time I went with 24 bales and a couple of bales of alfalfa so that id have it for the night the girls settled in and on hand as a treat. I figure this will last me about 6 weeks give or take. It really depends on how fast the grass comes in. All that will cost me just a touch over 200 bucks. Not to bad at all. I’m sure the closer to summer it gets, the cheaper my hay bill will be as well. I’m not going to complain over 100 bucks a horse though, thats for sure. The woman who is placing the actual order will let me know what day the hay comes and i will be there because now i’m in charge and i need to be there to receive my hay. Which i’m pretty excited about.

So thats done. Next up… grain!