It was finally unfrozen enough to ride! I had been going down and hanging out with the girls but riding was kinda not an option. I made arrangements for Michelle to come work with them both. Nobody had been on Jezebel since i got tossed though i had lunged her to make sure she was sound. The last time, she looked stiff in the right hind and left neck but not really off just stiff. When I got out to the field i was greeted by a happy Circe and Jez with her blanker half off making a fashion statement. Ha! I guess she didn’t want to wear it. I brought them both in and they were amazingly good. Sometimes bringing in two horses at once can be a challenge as they are not always well behaved. Today, angels. 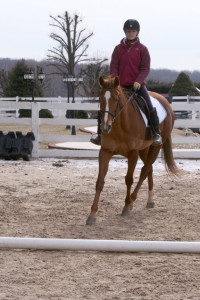 Circe was up first and i put out a trot pole just to keep things interesting. I haven’t done poles with Circe so it was going to be interesting to see how she reacted. Yanno with Michelle aboard cuz shes been rather spooky lately. Circe was doing really well. Michelle kept commenting how she really liked her head placement and how she wasn’t totally freaking out with leg pressure. She took her over the pole with it laying on the ground. She didn’t even bat a pretty chestnut eyelash. Went right over with out a second thought. Eventually we raised the pole a couple inches off the ground. The first couple of times she went over it, she crashed right though knocking it with either front or back feet. Though eventually she figured it out and really lifted her horse tooties up and over the pole. She looked lovely and ears were perked forward. It looked like she was having fun. Michelle was really smiling as well because Circe was doing so good. I don’t know what kind of (if any) training Circe has had before i got her but i do know that the girl who had her before me wanted to ride hunters. Circe knew this was a trot pole and really had no intention of ever jumping such a small little rise. Just trot, trot, trot. Totally un-fazed, doing everything that was asked of her. Eventually she did jump the tiny little pole but it was at the canter and with a lot of leg right before and …jump! Not miss judging the height with feet tucked and everything. Maybe it will be Circe going to jump school. 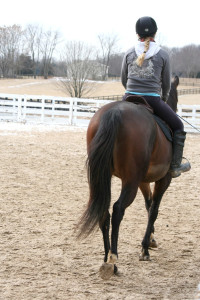 Jez was up next and was being such a good girl while getting tacked up. We discussed how to approach her issues. I’m going to have the vet out, the chiro out and the saddle fitter out. This will be over several months because to my great sadness i’m not made of money nor do i have a trust fund. Michelle thinks also that Jez’s confidence might have taken a hit and that were going to take a giant step back with her training. Were going to work on the little things, make all rides positive (and short) and slowly work her up. Michelle popped on her and did a lot of walk halt transitions. Jez has lost her brakes in all this and we’re starting from almost scratch. At the beginning of the ride Jez was not stopping until about 12 steps after she was asked and with her head all giraffe like. She was asked to give and put her head down after she stopped and eventually she got it. Stop, head down, relax. (with lots and lots of praise) All at the walk. There were a few trot to halt transitions but only a few then Jez was done. All in about 20 mins. 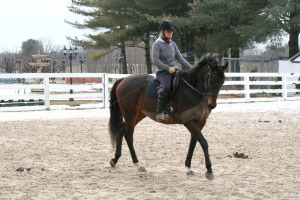 Also Jez needs to learn that she doesn’t make the decisions. Shes happy enough to plug around all day in the ring at her own pace but when you ask her to trot out, or be more forward  or hold her body straight or not throw her shoulder in (or out) she gets mad. So a lot of the transition work will be to remind her that i ask, she complies. The key according to my trainer is to be firm with her while not pissing her off. A delicate balance for sure. Um okay… i’ll work on that.  I’m going to replicate my trainers ride when the weather permits  me riding her (ugh snow storm) and were going to build up her confidence. I’m also going to continue her lunge work. Well see how the rearing goes. First day back she didn’t pull any shit, no kicking out, no bucking, no rearing but she wasn’t asked to do too much. So we’ll see how her attitude is as we go on and begin to ask her for harder and harder things. My trainer has a lot of experience with rearing horses, two she currently rides have the issue. So she’s got ideas and some tricks up her sleeve if we need um. It really is gonna be a time will tell kinda thing.

4 thoughts on “Time will tell”