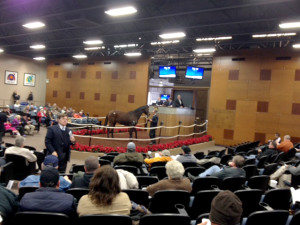 I went to the Mid Atlantic Thoroughbred auction the other day. I had never been and it was amazing! It was all you would expect from an auction where horses were going for the tens of thousand dollars. It had the podium where the auctioneers were doing there thing, the stage where the handlers would bring out the horses one by one and the spotters in the audience who would call back bids to the auctioneers. Two TV screens with the horses hip number and the ever rising dollar amount. Considering the amount of money changing hands it was a very relaxed atmosphere. I will chalk that up to racetrack people. They are their own breed and were a pretty friendly crowd. Everyone was nice from security to horse handlers. Might because in a crowd like that were everyone is wearing barn clothes and is just getting in from working at the farm you really cant tell who has  the big bucks and who doesn’t. As a result everyone gets treated like they could be the next person to bid a high dollar amount. 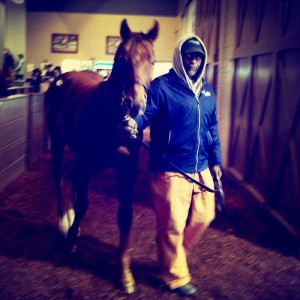 Mostly it was broodmares, almost all knocked up though there were a few broodmare prospects. The Damn of  Declan’s Moon was on sale and went for 62K but you could get a really nice horse in foal to a nice stallion for as little as 1k. A few never even sold. I wanted to take them all home with me. Especially the ones that didn’t sell. Hell some broodmares went for less then the stud fees for the baby horses growing inside them. Then they brought out the weanlings! The cutest things ever. All feisty and adorable. Some clearly had not been handled much but my favorite a chestnut weanling colt who was raised by the University of Maryland clearly had manners. This guy was big for a weanling and my guess is that he will grow up to be a monster of a horse! His handler could see me eyeballing him and graciously posed for some pictures for me. He went for a respectable 7+K.

You have to be registered to bid so i was in the clear for accidentally buying a brood mare or baby horse. Which i found out when i got home that  a friend of a friend did, accidentally bought a broodmare. However next year i might just go get one of my own. You can go out early several days and look at the horses. Trot them out, have a vet look at them whatever you need to do besides ride them. So i’m formulating a plan for getting one. Taking a few grand, making a long list of picks taking the trailer and seeing what happens. Yes the wheels are turning.