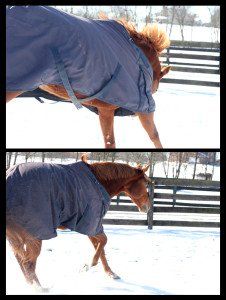 It was kinda on a whim. I wasn’t out shopping for another horse when Bonnie at After The Races (where i got Jezebel) posted that she had a couple horses coming back to her, no room for them and needed them placed/housed/fostered. For some reason I picked up the phone and made the call. Bonnie told me about the two horses and when i heard one was Syllogism, a horse that I not so secretly coveted all over the Facebook i couldn’t help myself, i said “I’ll take her” I then called my better half at work to try to explain to him what I had done. A few sort days later a shinny, sweet, chestnut mare came off the trailer and was in my barn. 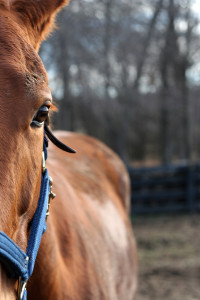 Over the past year i have learned a lot about The Circe Effect (the show name i’ve given her) That she is the most sensitive mare i’ve ever known, put a little leg on and she’s half way across the ring. Shes easily rattled and you have to be very sure not to get rattled with her or its all over and she will show you her Man From Snowy River impression.  That she sees dead people (for reals) as demonstrated by our mishap in the woods. That she hates cows and will stand on her hind legs to ward them off HER round bale. That if there is mud, Circe will find it. So much so that her name really should be Pig Pen. That she likes to snuggle and get hugs and that shes in love with an 8 year old girl. Circe has been a joy from day one and i never, not once regretted making that phone call. Here’s to many more years with my sun kissed, sensitive, sweetheart of a horse. Happy one year anniversary my beautiful red-headed mare.