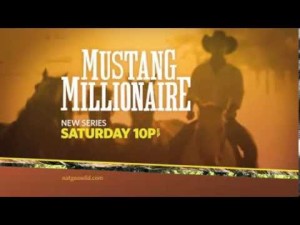 I couldn’t sleep the other night and i was flipping TV channels and i came across the Millionaire Mustang. They were playing a bunch of episodes in a row so i got sucked in to watch it. The premise is this, a handful of “cowboy” trainers buy wild mustangs from BLM and have 120 days to train them. Then they go to the big show where they have a few days of prelims. They do basic horsemanship, reining, trail trials and the top 20 go on to do a 3 and a half minute “freestyle” where they show off the horses skills. Last year this was won by a guy who did stunts with his mustang.

So I’m watching and they are buying their mustangs at auction. So far so good, though why you would pay 3k for a un-broke, unpredictable wild mustang is beyond me but I digress. Then the show gets dicey. I should have known it was coming because they are all “cowboy trainers” but its still shocking to me when i see someone take down a horse with ropes .. yanno to tame him. Or tie them by the neck from a lariat rope so when the wild horse gets upset for being neck tied for the first time he cant throw his head to the ground, he can only choke and hang himself yanno until he complies. I hate that shit, i hate that bullshit cowboy crap with a passion and seeing it on my TV didn’t make it any more palatable. Getting to know the trainers and their personal stories, like the one chick who kept taking about how the holy spirit was in the wild horse and Jesus this and Jesus that and had a half built house on her property from last years second place win. Or the divorced dad with the two twin boys (who could barely complete a coherent sentence) who were training yearling’s for the under 18 slot,  didn’t make their techniques any more reasonable in my eyes. One guy (who didn’t make the top 20) actually said his style was to “force the horse to softness” i fucking shit you not. More like torture the horse into compliance and break his will and possibly his neck into softness. 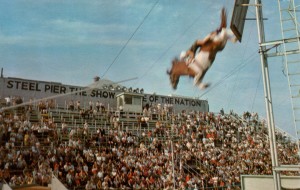 I’m not a fan of cowboy trainers. Which is not the same as natural horsemanship trainers though i don’t always jive with their hocus-pocus stuff. Some natural horsemanship trainers have some good ideas, i wouldn’t want throw the baby out with the bath water. You take what you can use and toss the rest. I love Buck Brannaman. I think hes got a gift. Hes the original horse whisper.  I’d take a clinic with him if it wasn’t 1500 bucks. Some people have those kinds of gifts like Cesar Milan  does with dogs, i swear dogs actually talk to him. But for every legit trainer with a gift theres some yokel trying to make a name for themselves by being cruel to horses. So back to the show… they don’t show a ton of the training techniques my guess is because the public would come down on Nat Geo’s advertisers if they really knew what was going on. They showed just enough to make my stomach turn though and eventually they go to the big show and some get eliminated and others make it to the top 20. Its called the Mustang Millionaire but theres no million dollar prize, top dollar is 200,00 and the winner wasn’t one of our cowboy trainers (spoiler!) but an old time ranch hand who’s freestyle was demonstrating cutting on his once wild mustang with a live cow. Second place was last years winner who again did a stunt, the horse climbed a freaking tower while he carried the lone star state flag. It remind me of the diving horses  that was popular at amusement parks at the turn of the century. I half wanted the horse to just dump him from the top of that tower. The anger i was feeling over this show wasn’t helping me sleep in fact i stayed up into the wee hours of the night hate watching it.

The worst thing about a show like this is that there will now be naive people who will seek out these horse tortures and the popularity of “cowboy trainers” will rise. If you love horses don’t watch this show it will only burn images into your brain you would wish you could forget later. Two giant hooves down.